This summer I went to a LOT of outdoor yoga and did no actual yoga. I loved being outside, the vibe of large groups of people gathering to practice but never actually laid out my mat since I was in charge of an event series. When I first heard about SoundOff’s HeliPad Yoga event with yogi superstar Elena Brower and Miami’s Jennifer Pansa, I couldn’t really wrap my head around what it really was.  I was pretty sure though, that the views from downtown’s helipad at sunset would be worth the uncertainty, and my final chance before summer ended to practice outside. I quickly accepted the invite and then a day later,  I took the train to a station I’d passed through but never gotten off at and let the adventure begin.

After waiting for a little while as they finished setting up, we were let in. A quick check-in, and drinks from Butcher’s Daughter and WTRMLN water, we were handed our headphones as we made our way out to the helipad. Sliding on the headphones, I went to find what would be my spot for the next hour and half. It was amazing to be completely surrounded by the normal NYC city noise and suddenly only be able to hear the pumping music and the occasional directions from Elena. It got me really excited for what was to come…

The thing that didn’t excite me at all, was ALL of the bird poop. It was everywhere… and I do mean EVERYWHERE. The germaphobe in me momentarily panicked and almost ran away. Then I had a stern talk with myself, picked the least terrifying spot and laid down my mat. I just spent the class being very, very aware of the parameters of my mat. Others seemed not to care in the slightest which was probably a much healthier response… but that dude who walked barefoot between mats really did freak me out. I tried to just let it go and focus on the absolutely amazing view around me since being on the Helipad meant that you were actually out in the water and both Brooklyn and Manhattan are a sight to behold from that vantage point. 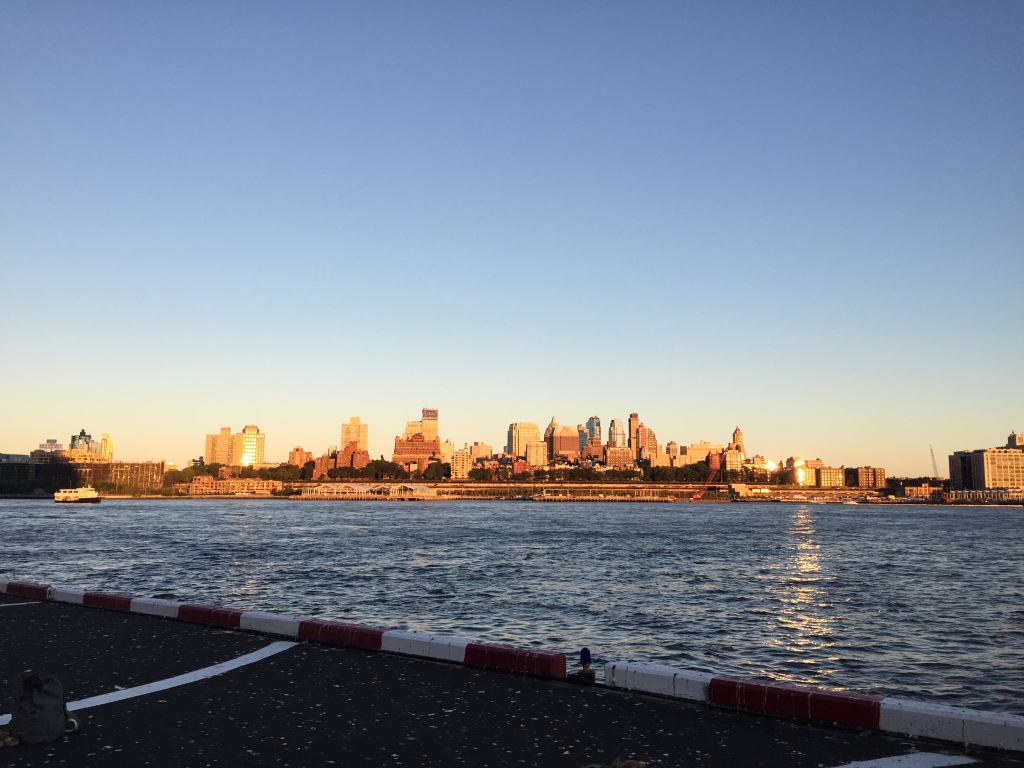 Elena and Jennifer led a joyful flowing class to the sounds of DJ Tasha Blank who really just seemed to understand how to both sooth and motivate you through music. It was easily one of the best soundtracks to any yoga class I’ve ever been too. Since we were on the Helipad, the flow focused on taking flight and being uplifted in every movement. I really went for the view… but found that as the sun set, the practice got more magical. As the night fell and the only lights were from the glowing headphones, I got lost in the beauty of the night and the practice. I stopped worrying about anything else and just let myself go with the flow of the evening.

As we lay back for Savasana, I looked up and fiinally, away from all of the building lights of the city, I could see the stars above me. I breathed in and was just fully grateful for this adventure. 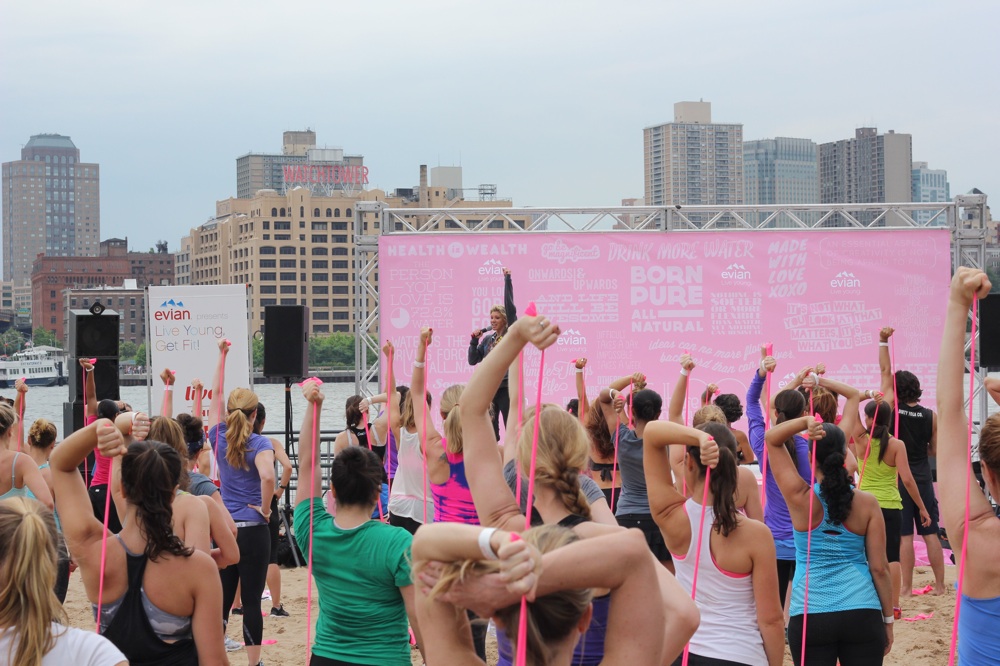 On Saturday, evian water sponsored an event as part of their “Live Young, Get Fit” campaign that brought Jackie Warner to NYC as part of a multi-city tour. From the moment I heard she was going to be in town leading a workout, I knew I had to go. What can I say? I loved her show on Bravo “Workout” and had seen her kick a lot of people’s asses in the gym and wanted to experience it first hand.

I was so excited about getting the chance to ask Jackie a few questions before the main event so I left really early to get there in time to meet with her before everyone else started to show up.  I arrived at South Street Seaport with plenty of time, settled onto one of the decks and just took in the amazing view of Brooklyn across the river. I never get down there so getting the chance to chill, to just marvel in the view before the hustle of being at the event, was a treat.

It was really interesting to get a chance to talk to Jackie Warner one on one about her 15 years of experience and the process of putting together the home based workouts that she teaches in her books and in her online platform Jackiewarner.com. Apparently, over the years, she has compiled a notebook of over a 1000 different exercise to pull from, which makes it easy for her to put together her effective home programs. I have to say, I would LOVE to see that masterlog of exercises that she has collect over her time working with different trainers and owning two separate gyms! Since classes are really my focus though, I asked Jackie about what kind of classes she recommends for people.

Jackie: “ No doubt about it, Barry’s Bootcamp – because Barry’s Bootcamp involves high intensity interval training with resistance training. If someone likes classes and they really want to lose weight, want to do it quickly, I ALWAYS put them on Barry’s Bootcamp. I believe it is a very sound program.”

Before I let her go though, I had to find out why she is so anti the modified pushup because after watching the first of the evian water events stream, that was the one thing I was really curious about. Her answer was pretty straightforward.  The pushup is about core strength and she would rather you do 5 regular ones than 20 modified ones to gain strength in your core. Interestingly, you are supposed to round your back slightly so that your core engages. Pretty sure I never do that normally but I certainly tried to when I finally got out the workout! 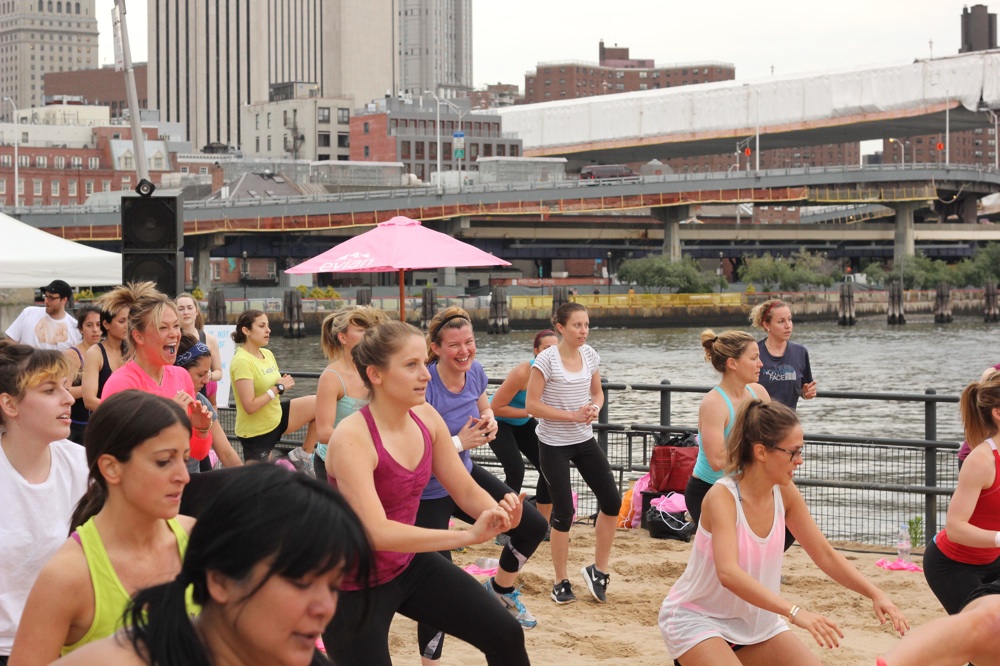 After my quick chat with Jackie, I join everyone else who had begun to show up for the day’s awesome event. It was such a kickass crew of people who where there and it was so fun to catch up with so many fitness friends. I swear, NYC has such an inspiring group of workout fanatics! The outdoor event was held in the sand at the beer garden and I had assumed that there would be mats on top of that. So I  was sort of surprised that there weren’t any mats out when I arrived but really, it hardly even mattered.  We were there to workout with Jackie. A little sand never killed anyone. Jackie, on the other hand, once she took the stage, was a little more blunt about it “Wait, there are no mats for them? Oh, you are going to get so dirty and you are going to HATE me. The first set called “The 300”, is 10 push ups, 20 situps and 10 squats, NOW GO!!” It was after that first set that we all knew just exactly how dirty were where going to get and we just had to go with it and have fun – at least that is what SINworkouts and I tried to do. We were distinctly the rowdy girls of the group, hooting and hollering and just having fun. 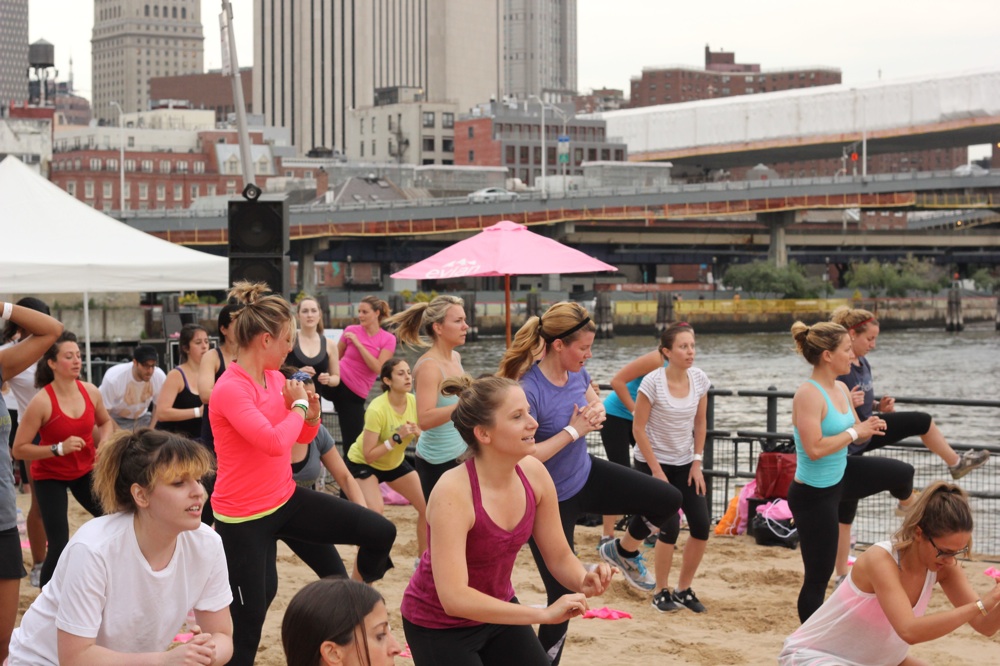 The workout was basically sets comprised of two different but complimenting movements, done twice. Jackie would explain & demonstrate the movement, then watch us as we did it – which made for a stop and go feeling in the class. SIN and I had way too much fun trying to sync our movements, though, and more than a few times, Jackie shot us a comical look. I don’t think she knew what to do with two people who were having so much fun while still doing the exercises. I think she is used to people looking like she is trying to kill them! Jackie’s style of instructing is very serious and really, there is a portion of the workout that felt more like a group personal training session than a group class – which isn’t a bad thing at all,  just different.

The workout was, at its core, a bootcamp style workout, which I always like. Working out in the sand was HARD though and it made a lot of the exercises and combos feel much harder than they should have. I seriously felt that workout the next day!  By the end, we were all really sweaty and the sand was plastered to our backs, arms and legs – we were also starting to dig little trenches around ourselves, turning up weird things in the sand – drinking straws, bottle caps, even a lemon at one point – but by the time that happened, it all just seemed funny. It was a great, challenging workout and I loved getting to finally workout with Jackie Warner, even if it was more than a little dirty!

After the workout, there was a Q&A with Jackie where she answered the audience questions about working out, food choices and supplements. A  couple of interesting facts came up – if you drink 3 liters of water a day, you burn 33% more calories a day (good to know!) and Jackie works out 6 times a week with one day of active rest. I wasn’t taking notes, though, because at that point, I was just sitting in the sand basking in the sun that had finally come out and had just completed a great workout!  Although, I do know no one asked my final question in the one on one: “what is your drink of choice?” Jackie’s answer, by the way, is a “Grey Goose Dirty Martini”.  So, if you see her out, you now know what to order! You can’t be healthy ALL of the time…

Photos taken by Eric C Stafford for the FBS blog.