Boxing is one of those things that I think, if you want to study, you have to go to a real deal boxing gym – the standard gym version of boxing just isn’t going to cut it.  Last week, I went to Trinity Boxing Club and got schooled.

There are a lot of boxing gyms in NYC but Trinity Boxing stood out to me because their whole motto is that they are “for people who want to train like professional fighters but don’t want to lose their front teeth doing it.” Hello. Exactly what I wanted.  Teach me how to throw a punch but don’t punch me in the face. Is that so wrong? 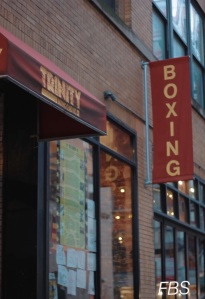 I set up a “trial lesson”, which is Trinity’s version of a 1st time session to see if it’s for you – and at $30, it’s hands down one of the best deals in the city.  The trial lesson is roughly an hour… unless it takes longer.  So, good rule of thumb is that you shouldn’t plan anything right after a trial lesson.  After checking in with John Snow, manager of Trinity Boxing, signing my life away (as you do in any new spot), I made it downstairs to stash my stuff in their women’s locker room. It’s basic but totally better than any other boxing gym I’ve seen! 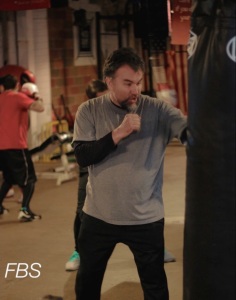 As I made my way upstairs, I was a little nervous about what was ahead but also REALLY excited to see what was in store. At the top of the stairs, John appeared and asked if I was ready.  I answered with a huge grin, to which John just smiled and raised an eyebrow: “As ready as I’m going to be!”.  Looking back, I realized that he knew that he was going to kick my ass. He wrapped my hands and explained that they were to protect my tendons, not my knuckles and then took me to the back of the gym to warm up. “Ok, you have 3 minutes of jumping rope, the buzzer will sound when you have 30 seconds left – keep going. When everyone else stops, so can you.” So for 2 rounds of three minutes, I jumped rope. It was brutal.  For me, jumping rope gets old fast but I managed to keep it up. I didn’t want to show any weakness… game face, people. 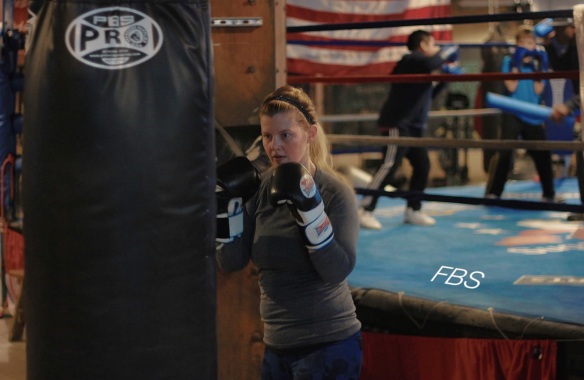 The next stop was a heavy bag anchored to the wall that we used to work on combining the punching from Shadow boxing and lateral movement. It was comically hard for me to get the hit, move, hit, slide back routine. I kept getting overly excited and either going too fast or forgetting to move over at all but damn, it was fun to start actually using those punches.  John patiently gave me pointers in each round and never made me feel bad at all.

Next up was hands-down my favorite of the bag work – the heavy bag. Circling around the bag and combining punches just felt awesome. It doesn’t move that much, so it was easier to move around and really get a feel for hitting that heavy bag. I’d get pointers, nod and try to put them into effect.

I was wiped out at the end of those two 3-minute rounds and gratefully accepted when offered water… which of course you need help with because your hands are sealed up in those big gloves. Pro tip: Wide mouth bottles are not awesome in this scenario, there is a solid reason every boxer is seen with a squeeze bottle. Lesson learned. 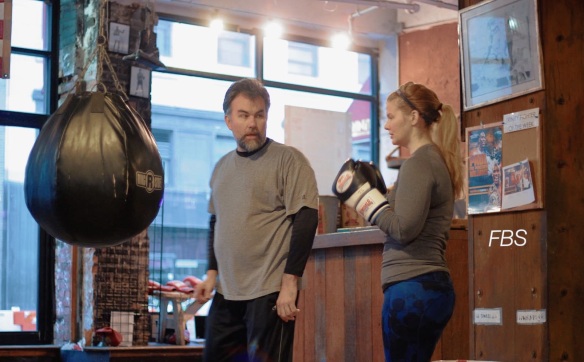 Then we were off to a free-swinging medium sized heavy bag. I was epically bad at this one since I was just terrible at gauging when I should be swinging and would scoot back when it would swing back at me.  This bag really shows what your weakness would be in a fight, because as I was told “no opponent stands there and waits for you to hit them. They are going to move – AND swing back at you.”  I worked for the next round to not back up, keep moving and get that timing right.

The final 2 boxing rounds were with Ramon wearing boxing mitts that would serve as my targets. Seriously, there is hardly a better sound in the fitness world than when your glove really connects with the catch. Thwap! He would call out combos and I would throw them. Sometimes well. THWAP! Sometimes not… at which point he would stop and demo again what I was going for. This was so much fun it felt like the room fell away and I was able to just focus on swinging, connecting and that awesome sound.

At the end of that final round, John checked in on me and took off my gloves. Ramon moved in to help me remove the wraps and I thought the lesson was over until I was told to follow Ramon for conditioning. A member who’d just gotten there joined me and we did rounds of various ab work, mountain climbers, and planks for time. It was fun and a good way to end – I was tired but could get through all the moves without collapsing, which is always a good thing!

Then it really was done. I toweled off, drank some water and looked around the room and just reveled in being there.  Trinity boxing is serious about their sport but really, they just want to help you find that love of their sport and at Trinity, that is easy to do.  I walked out of there physically exhausted but giddy with excitement AND trying to figure out how I  could do it again…